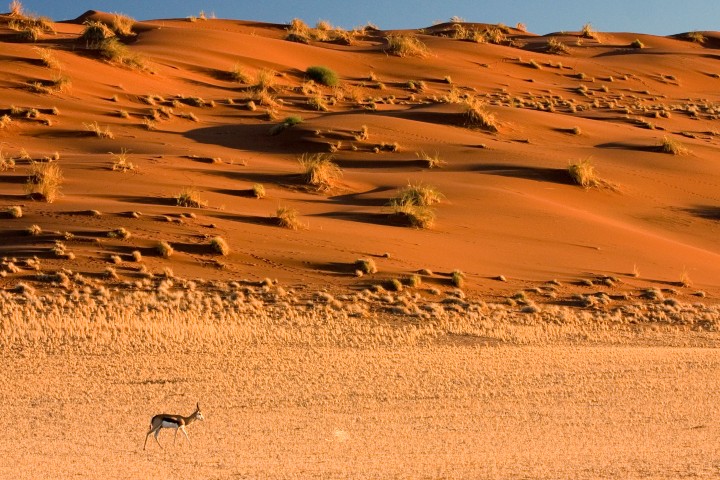 NAMIBIA is a vast, sparsely populated country on the Atlantic coast of south-west Africa. The spectacular landscape includes deserts, rugged coastline and hilly plateaus, and the north is renowned for its game.

Namibia is known for its contrasting landscapes. The desolate Namib Desert is said to be the oldest in the world, with its high dunes and awe-inspiring sense of space. The central plateau, with its thorn bush savannah and rugged mountains rising abruptly from the plains, gives way to the majestic Fishriver Canyon in the south.

In the north of the country, landscapes range from dense bush and open plains of the great Etosha Pan, to woodland savannah and lush vegetation. Dinosaur footprints preserved in sandstone, prehistoric rock art, the ancient fossil plant, Welwitschia mirabilis, all bear witness to the timelessness of this country.

What to see in Namibia

Namib Desert
The seemingly endless rolling red sand dunes are probably Namibia’s signature attraction and feature in thousands of postcards and photographic books. The desert is believed to be the oldest in the world and a famous distinctive S-shaped dune can be found at Sossusvlei, which rises to almost 1,100 feet. Just as breathtaking is the Deadvlei, with its eerie skeletons of trees which died hundreds of years ago. The best way to appreciate the sheer size and scale of the dunes is to take a scenic plane ride. As you skirt across the top of them, it feels as if you are looking at a different planet. 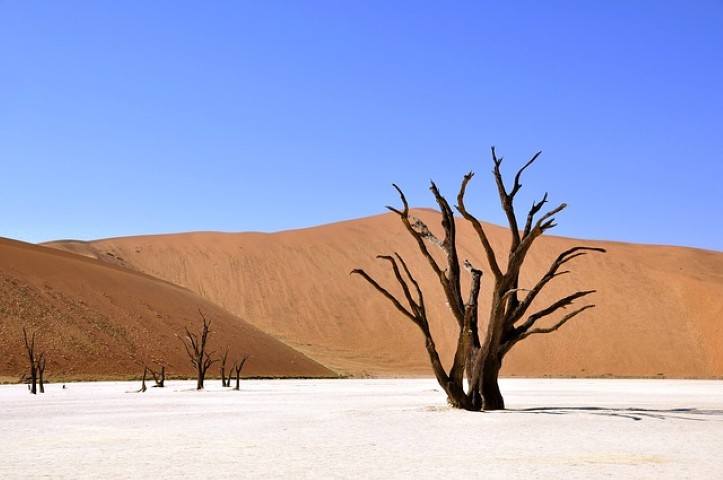 The South
Southern Namibia presents some of the most spectacular landscapes in the whole of Namibia. Bordered by the dry savannah of the Kalahari to the east and the Namib Desert to the west, the geological history book of the earth can be found at the Fishriver Canyon. From the early gneisses (also called arch rock) at some 5 billion years old to the more recent 20,000 year old sedimentary formations known as the Inselbergs, the terraces and vast plains tell a story of their own. 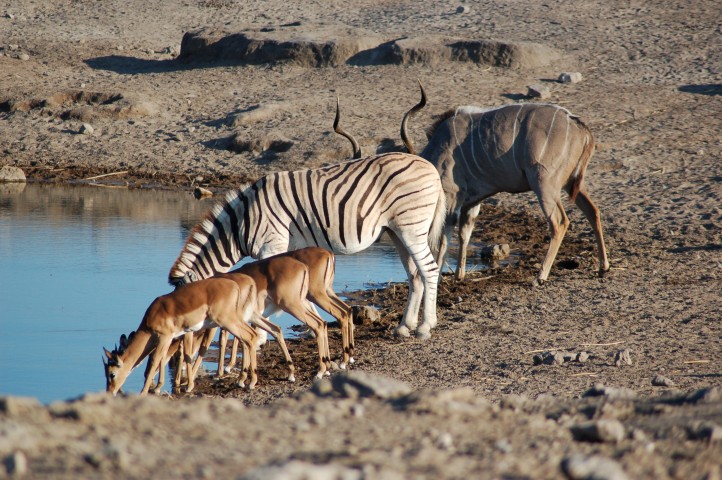 Kalahari Desert
In the south-east of Namibia lies the country’s second major desert. It is very different from the Namib as it receives a lot more rain, which makes its dunes greener than most deserts. This creates a less stark atmosphere than the Namib. It also offers game-viewing away from the more popular Etosha or Caprivi Strip.

Etosha National Park
One of Africa’s largest game reserves, Etosha is based around a huge silvery-white hollow, the Etosha Pan, surrounded by grasslands and bush. The area is home to lion, elephant, giraffe, wildebeest, leopard, cheetah and numerous kinds of antelope. The best time to see the wildlife is during the dry season between July and late October. There are three campsites within the park and several private lodges just outside. 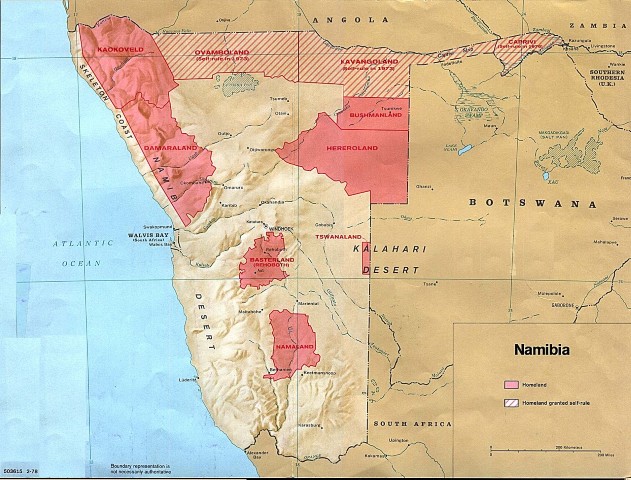 Back to top Skeleton Coast
The northern part of Namibia’s coastline, is a spooky desert shore with massive sand dunes and treacherous rocks which have claimed many ships through the centuries, giving the area its name. Although many of the shipwrecks have now disintegrated and there are fewer accidents these days thanks to satellite navigation equipment, several can still be seen – one of the most accessible is the South West Sea, near the River Ugub. One of the best ways to experience this region is to take a scenic flight along the coast. 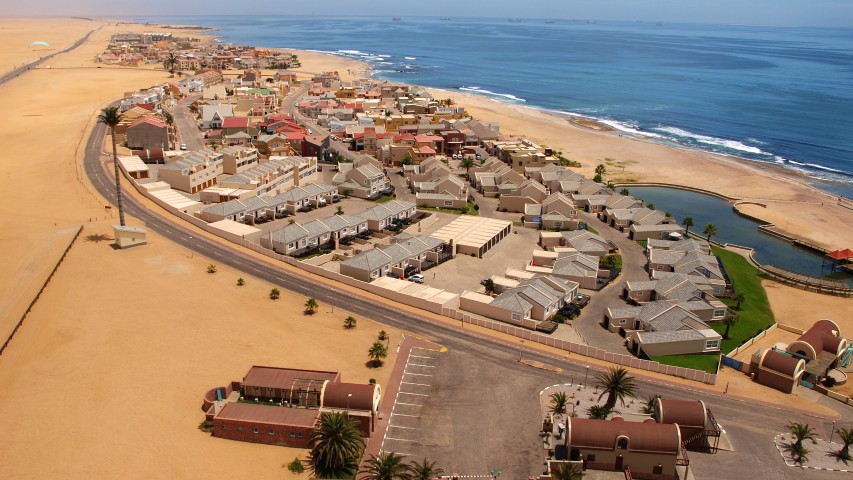 Damaraland
This area, running inland alongside the Skeleton Coast, is renowned as one of Africa’s last wildernesses. The northern region is home to thriving populations of game including the famed “desert elephants”. The main attractions of the southern area of Damaraland are the mountains of Spitzkoppe and Brandberg, the rock art at Twyfelfontein, and various strange and spectacular rock formations.

Caprivi Strip
This narrow stretch of land protrudes eastwards from the extreme north-east of Namibia, connecting it with Zambia and Zimbabwe, and creating a more unusual gateway to Victoria Falls. Unlike the rest of the country, the Caprivi Strip is lush, with several major rivers running through it. There are several riverside reserves, with an increasing amount of wildlife, and lodges in this region.

Windhoek
Namibia’s cosmopolitan capital has plenty of shopping and dining options, as well as some impressive buildings. Museums worth visiting include the National Art Gallery, while the National Botanical Garden makes for a pleasant stroll.

Central Plateau
Runs from North to South with an average altitude of between 1000-2000m. This area has breathtaking landscapes, rugged mountains, rocky outcrops, sand-filled valleys and endless plains. 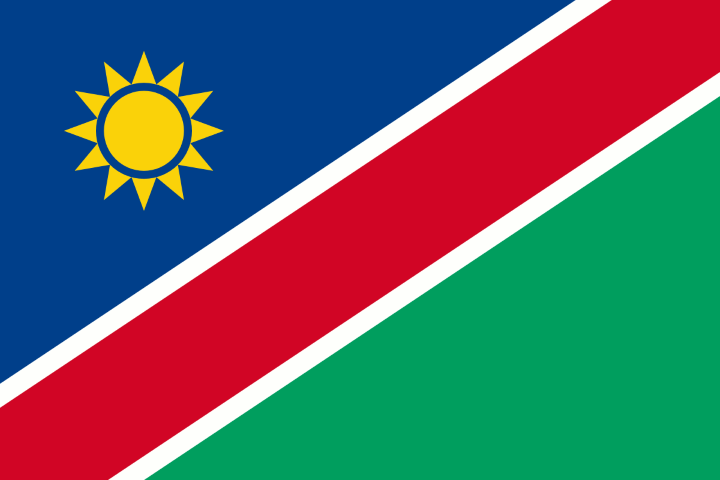 UK and Irish citizens do not need a visa, but must have a passport valid for at least six months on entry.

Language
English is the official language. German and Afrikaans are also widely spoken.

Currency
The Namibian dollar (N$) is pegged to the South African rand at 1:1. Both currencies are legal tender in Namibia.

Weather
Namibia enjoys sunny weather year round. Temperatures can exceed 30°C in summer (November-February), while in winter (May-August) they range between 5°C and about 23°C.

What to Pack
Take cotton clothing for the very hot summers. During winter, bring light clothing with sweater or jacket for the cold evenings.

Entertain the Kids in London

Entertain the Kids in London