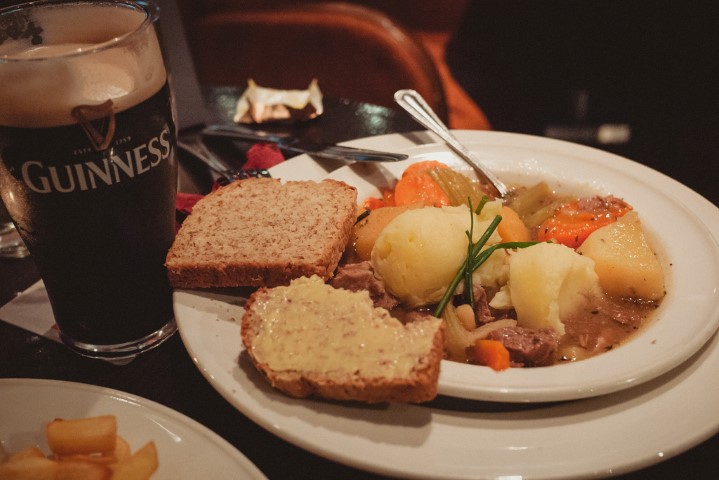 Savour crisp cod and chips direct from the paper wrapping as you walk the Howth seafront on a brisk day, kick back in a cosy brass and mahogany alcove in a Dublin pub, or sample fresh seafood on the Dingle peninsula’s Atlantic shores.

Wherever you go in Ireland, the fare will be wholesome and comforting.

Dublin is a booming renaissance city and its chefs are giving international twists to old favourites, but traditional dishes survive to sustain and delight. A typical Irish breakfast (called ‘a heart attack on a plate’) is fried eggs, bacon or ham, black and white puddings, and lots of tea. Morning coffee is obtainable at one of the many museum cafés or at Bewley’s Oriental in Grafton Street, which boasts a dark oak, marble and stained glass interior.

As the hero of James Joyce’s Ulysses remarks, it would be a puzzle to cross Dublin without passing one of its 800 pubs. It’s the craic (lively conversation) that will draw you in, inspired by the flow of pure Guinness and traditional pub fare. Potatoes appear as boxty (pancakes enveloping meat or vegetables), champ (mashed potatoes and chopped spring onion eaten with a spoon dipped in melted butter), colcannon (similar but includes cabbage and leeks), and Dublin coddle (a potato mixture of boiled bacon, sausages and onions).
‘Cockles and mussels alive, alive-O’ sang Molly Malone in the 19th Century (her statue at the top of Grafton street is known as ‘the tart with the cart’). These are still favoured, along with prawns (really langoustines) from Dublin bay, served hot with melted butter or cold with cocktail sauce. Donegal crab, Dingle bay lobsters, Wexford mussels, and Galloway oysters all appear on Dublin’s tables. A ‘Dublin Lawyer’ is a rich dish of lobster cooked in whiskey and cream. Ireland loves its cream, whether it’s poured over apple pie or cheesecake, whipped and floating atop whiskey-spiked coffee, or added to a Bailey’s liqueur.
Sole, plaice and wild salmon, grilled or smoked and served with capers, are staple fish dishes in Ireland, while beef and lamb top the meat menu, with the latter often appearing as cutlets in Irish stew with vegetables and potatoes. On days when the mist swirls along the River Liffey, pea and ham or potato soup are served with a slice of soda bread to warm the tummy.

Pure, authentic Guinness is Ireland’s signature beverage. You’ll have to wait at the bar after ordering while your stout is drawn correctly, and you can see it being made in its Dublin brewery. Murphy’s is another respectable Irish stout, while Plain Porter and Oyster Stout (with oysters used in the boil) are available from the Porterhouse pub in Dublin. Best-known whiskey brands are Jameson, Powers and Paddy. Irish Mist is based on a 17th-Century herb-and-honey recipe. A more recent brew from 1988 is Boru vodka, and be sure to try some of the dry gin from Cork.