Never occupied by the Turks, the Ionian Islands hug Greece’s western coast, book-ended by Corfu to the north and Zakynthos to the south.

The Byzantines, Venetians, French and British have all ruled the islands at one stage or another, as the neoclassical architecture of Corfu Town and other island towns attests. Lusher, more densely wooded and with some of the best beaches in the Aegean, islands such as Kefalonia, Corfu and Zakynthos are among the hottest destinations in Greece.

Corfu: Dominated by the mighty Pantokratoras Mountain, the northeast coast of Corfu is the stuff of Rothschild holiday homes and visiting royalty. Corfu Town is situated halfway down the east coast and boasts the prettiest square in the Aegean, the Spianada. 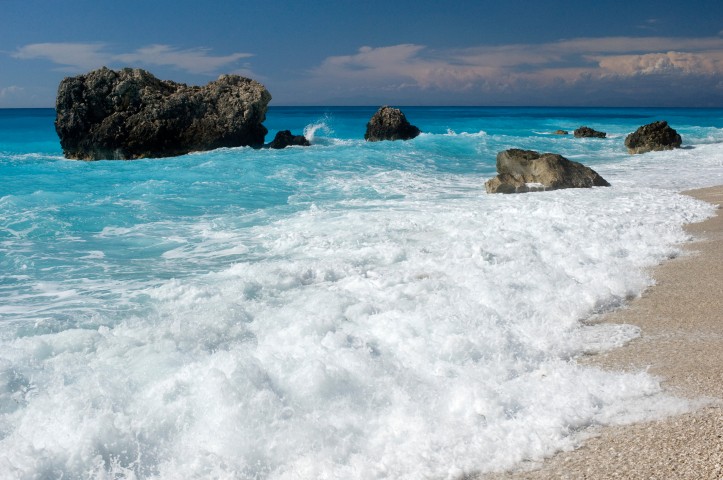 Fortunately for Corfu Town, the lack of beaches around the harbour has left the Venetian splendour of its buildings intact. Package tourists in search of sun, sand and sea stay in the disco-filled resorts of Dassia, Ipsos, Pirgi and Kassiopi, which have mushroomed to the north of Corfu Town. To the south, popular and rowdy resorts include Benitses and Kavos. 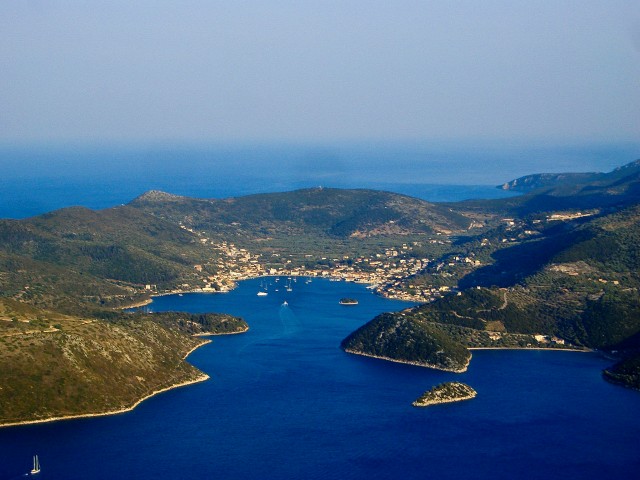 On the other hand, the western side of the island has beautiful, deserted beaches such as Moni Myrtidon and Myrtiotissa — described by Lawrence Durrell as the most beautiful in the world — and much quieter villages such as Paleokastritsa and Pelekas. 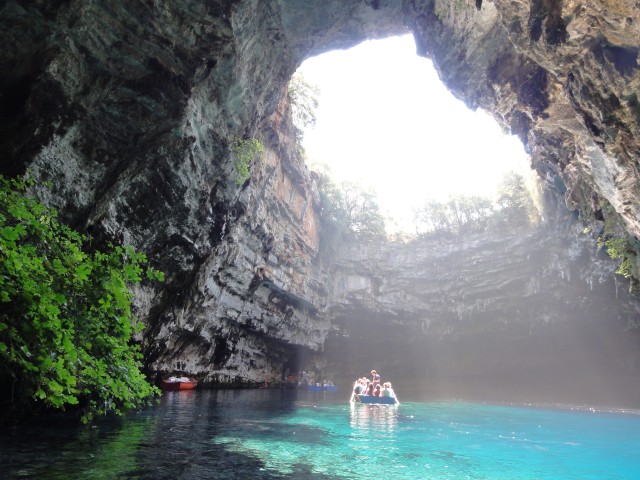 Sidari in the far north of the island is also very relaxed. The exception to the rule is the Pink Palace at Agios Gordios, where thousands of backpackers spend their nights in ouzo-induced mayhem and their days recovering on the beach.

Paxos: Heading south from Corfu, you come to day-tripping Paxos, the smallest of the Ionian islands. Paxos is a city of olives: 300,000 silvery-leaved, gnarly-barked trees cover the hillsides, making the island perfect for shady summer rambles. 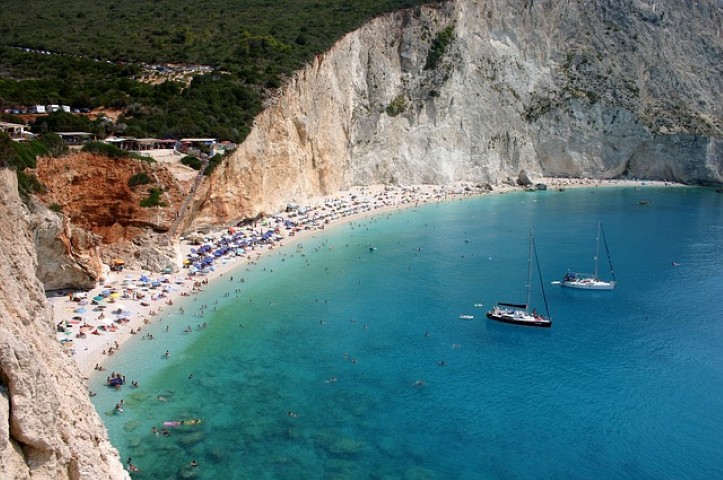 It is possible to stay both in Paxos Town and in Lakka, which the strong winds make an ideal place for windsurfing. There is also accommodation on the satellite island of Antipaxos, five kilometres south of Paxos, which is very peaceful indeed.

Lefkas: The only Ionian island to have been conquered by the Turks, Lefkas is connected to the Greek mainland by a causeway. It is quiet, with excellent beaches and a wooded interior popular with walkers. 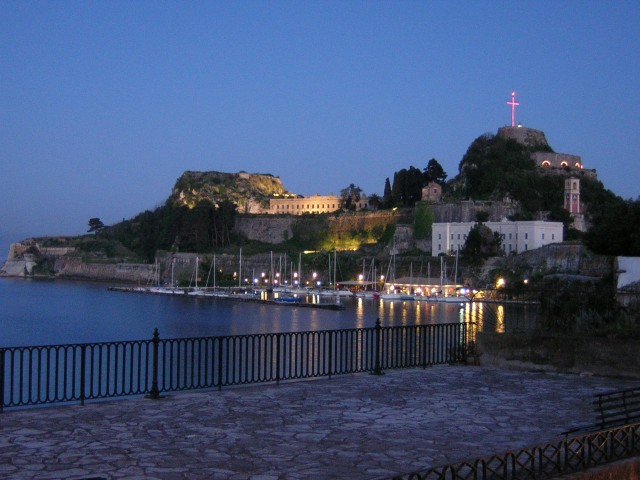 It is possible to stay in the fishing village of Agios Nikitas, Levkas Town, touristy Nidri and the windsurfing village of Vasiliki.

Ithaka: Legendary home to Odysseus, Ithaka is small and somewhat overshadowed by its neighbour Kefalonia, but none the less charming for that. The main town, Vathi, is located on a near-landlocked inlet surrounded by steep wooded hills. It’s also possible to see the ruined Bronze Age palace popularly supposed to have belonged to Odysseus.

Kefalonia: Made hugely popular after the book and film of Captain Corelli’s Mandolin, Kefalonia (or Cephalonia as it is also spelled) is the largest of the Ionian islands, featuring a mountainous interior and fertile lowlands that produce citrus, olives and the prized Robola wine. The main town, Argostoli, was badly damaged in a 1953 earthquake; thus the northern settlement of Fiskardo is the only town on the island to have retained its Venetian architecture.

Small villages dot the pebbly, steep-cliffed coasts and the colour of the sea around Kefalonia is said to be bluer than anywhere else in the Aegean.

Zante: After Corfu, Zante — or Zakynthos, as it is also known — draws the biggest number of tourists to the Ionian Islands. Its fertile interior led the Venetians to dub it ‘fior di Levante’ (‘Flower of the Levant’), and a visit in spring to walk through the pasturelands ablaze with blooms will tell you why. The main resort on the island is Laganas, which boasts four kilometres of the softest, whitest sand in the Aegean. It is packed with clubs, bars and hotels luring international revellers. Unfortunately, tourism and nature collide here, as sun loungers and parasols crush the loggerhead turtle nests that share the beach. Water sports powered by speed boats in Laganas Bay send the turtle mothers-to-be for six as well, so if you do go, be sensitive to these creatures, which have been coming to Laganas for 80 million years, but whose numbers have halved in the last 20 years. 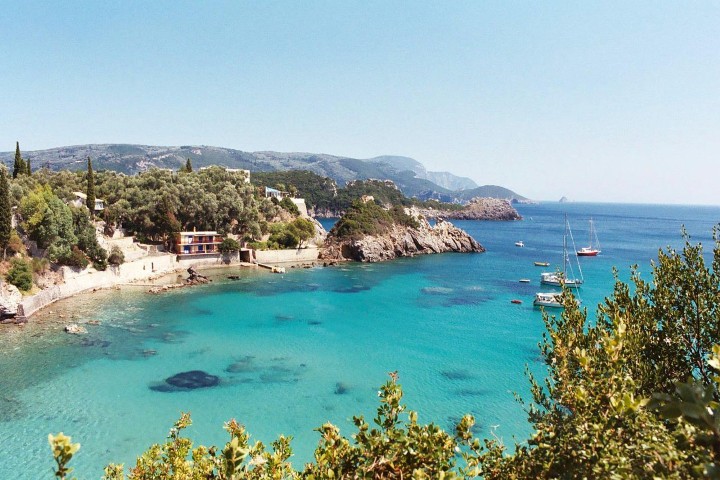 Popular resorts apart from Laganas include Argasi, with its kicking nightlife; Alikes and Alikanas, which share the best swimming and sunbathing beaches on the island after Laganas; and the little village of Vasilikos, close to the lovely beaches around Porto Roma.